Dairy farming has developed over recent years into a more professional and intensive process. There are still many differences among regions around the world. UNIFORM-Agri is one of the top dairy herd management software packages on the market. UNIFORM works as a centralized data hub, linking to many other on-farm systems, thus, making it possible to analyze high quality data from various sources, in one program. UNIFORM offers insight on areas such as milking machinery and procedure, sustainability, health and fertility performances.

With the large number of UNIFORM users worldwide, the aim of this project is to compare the dairy herd management between UNIFORM users in different countries. Compared countries include Canada, The United States, Spain, France, Germany, The Netherlands, Belgium, Denmark and The United Kingdom. Analyzed areas of performance are milk production, sustainability, fertility and health. We expect to be able to inform you with results about every other month.

It is important to consider the number of participating herds for each country included in this initial analysis of the project. There are more farms included from The Netherlands or United Kingdom than from other countries. Therefore, data from countries with a higher number of participants are more accurate than others. 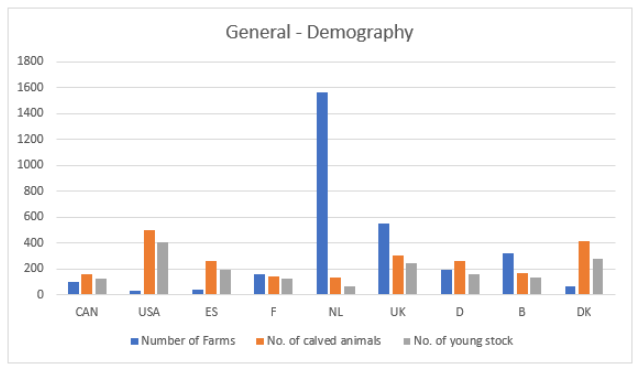 Figure 1. Number of farms per country in Project (blue columns) and average size of the herds (Nr. of calved animals in orange, nr. of youngstock in grey). The Netherlands is the country with more participants, followed by United Kingdom, Belgium, Germany and France. USA and Spain are the countries with less farms in survey.

MILK PRODUCTION AND SUSTAINABILITY
This first chapter highlights the starting points in milk production and sustainability. 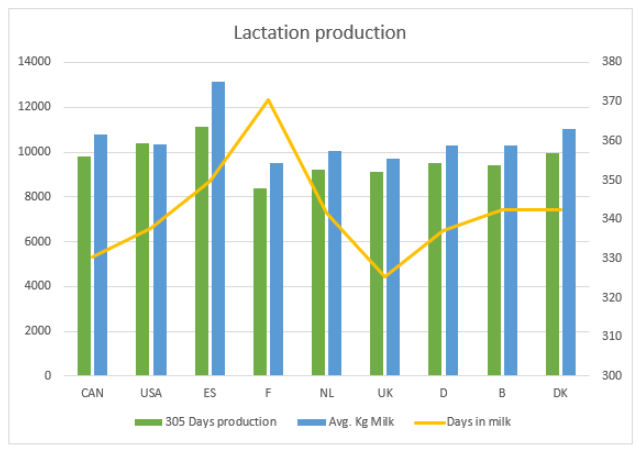 Figure 2. Average production during lactation and 305 days production, combined with Days in milk for finished lactations.

Spanish farms are observed to be highest in both total lactation production and average daily milk yield. Denmark and Canada are on 2nd and 3rd highest in milk production. However, if we look at level of milk production relative to the number of days in lactation, the UK shows fewer days in milk, followed by Canada. Therefore, production in Canada is more efficient than in other high producing countries such as Spain, USA or Denmark.

French farms show the lowest values in milk production and daily milk yields with the highest days in milk per lactation.

Highest Standard Peak Production scores present in Spain at 54 kg. Denmark and Canada are close behind with an average value of 47 kg. 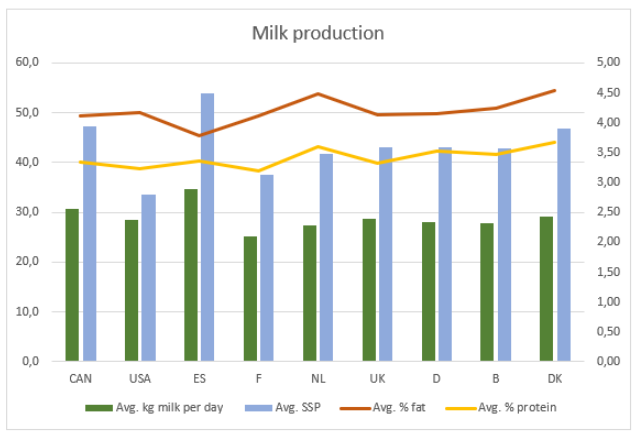 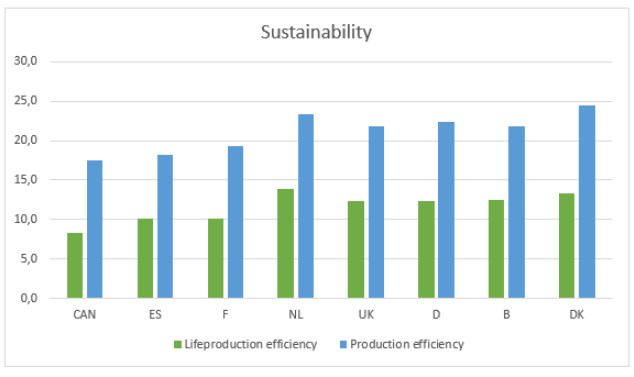 In general, there are not better producers than others among the farms in this survey. Every country has a different environment, different circumstances that determine how milk is produced, and difference systems determining the product value paid back to the farmer. For example, considering milk production, depending if we look for volume or for milk quality, the best performers are different countries. Although Denmark would still be in the top rankings.